My partner and I have put together a GoFundMe campaign in hopes that we will receive help and support. Five days ago two dogs attacked our furbaby, Wolfgang, while he and I were on our way back home from an early evening walk in the neighborhood. I tried to protect Wolf by standing in front of him and yelling in a commanding tone for the dogs to stop and go away, but it didn’t work so Wolf quickly positioned himself in front of my body to protect me. These dogs charged full speed across their owner’s property, crossed over the road and attacked Wolfgang without hesitation. I tried my hardest to separate them but it was impossible – the large dog was most likely a pitbull too so he and Wolfgang kept locking jaws with one another, and the other dog kept attacking Wolf’s neck, belly and legs. Wolf was badly wounded. If you are easily triggered, quickly scroll past. 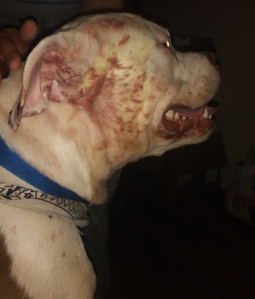 Multiple bite wounds on the face, and torn right ear

Bruising in his eyes 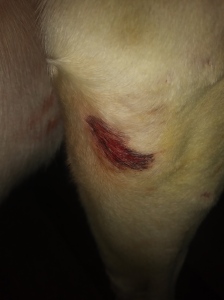 The whole experience – being present during the attack and not being able to protect him; getting him home while he was wounded; nursing and monitoring him through the night until we could get him to a vet; the panic, anxiety, exhaustion and financial burden – was and has been a really traumatizing, horrific experience. I wouldn’t wish this on any person. Those who have loving companions such as Wolfgang know just how precious and cherished they are, the beautiful gift of Love they bring, and that they are FAMILY… and it is scary as fuck when something happens to them. 😦

We are reaching out for help because Animal Control cannot do anything at this point because the neighbors lied and said that my partner trespassed their property and threatened them. So, by the time my partner had walked back home and called the police about the attack, it was already in the system through the dispatch that it was a “domestic dispute” instead of an “aggressive dog attack.” Animal Control told us that they have given the Sheriff’s Deputy “the courtesy” of taking this incident, but advised us to file a civil suit. The Kentucky Humane Society does not want to offer aid, or get involved, because we will be filing the law suit. We looked into applying with Red Rover but because we have not neutered Wolfgang we do not qualify for the aid [wtf?].

So our campaign is two-fold – to raise funds to help us during this financially tough time, in taking care of Wolfgang AND standing in Truth seeking justice to make sure these people, who have exhibited dishonesty out of guilt and fear, are held liable for their dogs and their lies. It is very upsetting that someone would even lie when they know their dogs have done something hurtful to someone else. It really is upsetting, and if you know me, you know I am all about standing in Truth, standing up for what is right, living in authenticity and standing up for rights. We tried to settle it with them in a friendly manner, and they instead retaliated with lies, so we have decided that the civil suit is what is best [and it will cost to file the complaint].

You are more than welcome to make donations through the campaign page Help Wolfgang Recover or my Paypal Account. Either way, it will go directly to us. What I have noticed, however, is that GoFundMe takes a percentage of the donations for using their platform and we won’t receive the funds right away.. we have had our first donation but won’t receive it until next Tuesday [Nov. 1]. That part is a little frustrating. If you go the Paypal route it will go straight to me, right away, no fees, no wait and if you opt for that option we are grateful. If you do choose to donate through Paypal, just let me know in the Notes section [of the transaction] if you would like a photo magnet of Wolfgang thanking you. It will be at the bottom of this post for you to see what it looks like. Please share the campaign with anyone and everyone, and if you have any suggestions on the anxiety or suggestions on natural products and natural remedies to help heal his wounds that would be sooo appreciated! ❤ 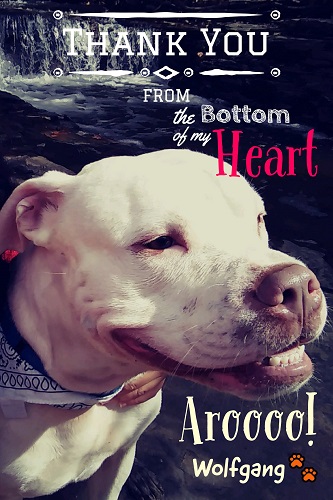