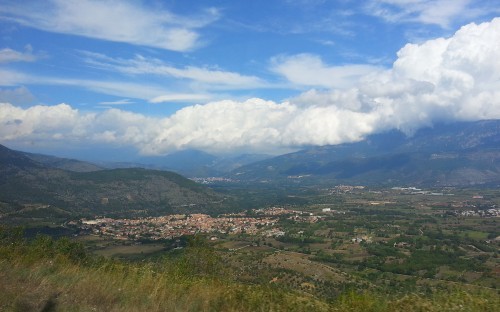 These past two days have been interesting — I have not gone to bed [a.k.a had decent sleep] since Tuesday night. Wednesday night I did not go to sleep because I had to catch a train at 4:19 a.m. Thursday morning from Sacile to Venezia [Venice]. I did not see any point in sleeping — it would have teased me and probably pissed me off. At the Sacile train station I found two men sound asleep inside — one on a bench, another on a table in an enclosed room. Other than that it was like a ghost town…with one train waiting at binario 1. My train. It was dark and I was spooked. Not only was I traveling alone in another country for the first time, but my train had to be dark as hell?!?! 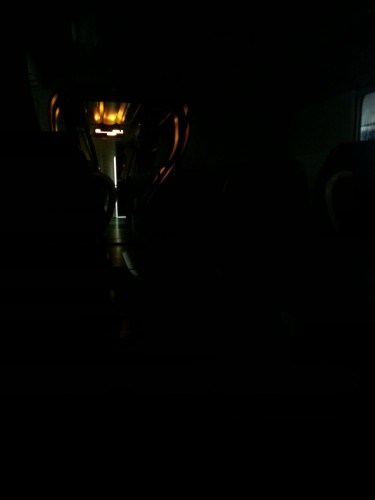 This is how dark my train car was..with the exception of a creepy glow coming from the area where the next car was connected.

I waited until it was five minutes until departure then walked onto the train with my luggage. When the train began to move the lights flickered and then turned on. [[Sigh of relief]]. It felt like a ghost train for about 20-30 minutes before people from various towns boarded along the way to Venice. 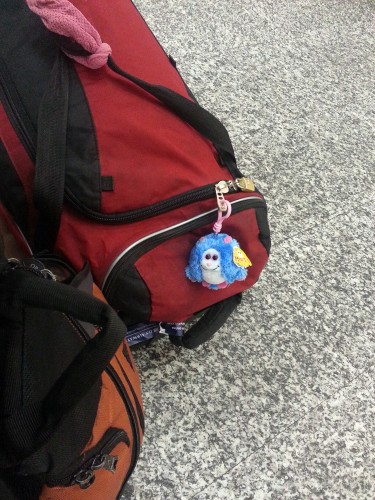 I waited inside the cafe at Venezia Mestre. My bags, with the “monstie” attached [a gift given to me by my former co-worker & former student].

After an hour and a half wait at Venezia Mestre I boarded my next train, which seemed like another ghost ride. A few people sat in the same car as me, but it was dead quiet and I nodded in and out of consciousness……it was a four hour ride. I snapped to attention when my stop neared. I was fascinated with my view — the train tracks were alongside the eastern coast of Italy so I was looking out at the Adriatic Sea. It was very beautiful. I uncomfortably nodded in and out of sleep until I realized we were arriving at Pescara Centrale. 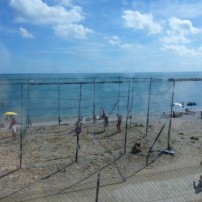 In my sleep deprived state I didn’t have to wait long for my third train. Once it pulled up to binario 2 I hopped on that bad boy, put down my heavy duffel bag and two smaller bags, and sat down in a seat to zone out for the next two hours. Unexpectedly, an Italian girl with pink-rimmed glasses and brown curly hair asked me something and pointed to a seat in front of me. I looked at her and said, “I don’t speak Italian, I’m sorry….would you like to sit here?” And she exclaimed, “Ahhh, yesss, THAT!” as she smiled and plopped down in front of me. We smiled at one another and then I leaned against the window pane and slipped in and out of sleep for the next hour or so. When I woke up…I saw beautiful mountain peaks, valleys, and towns. The girl was curled up in her seat asleep. [The train was very cold.] I managed to get out of my seat without waking her and I stood on the opposite side to look at the gorgeous view of the mountains and valleys.

The scenery on the train ride was absolutely beautiful.

The area here is so green, compared to Northern Italy.

I was awestruck by the mountains and the valleys on my way to the Abruzzo region.

Eventually the train stopped, as it does at every train stop, but it did not move after a couple of minutes. The Italian girl woke up confused and mumbled in Italian. After five more minutes passed I asked her in English if she knew why we were not moving. She could not understand me so I asked in Spanish. This ice breaker started a fun and interesting conversation session with her until I reached my last stop in Cerchio. She could not speak English but she understood me when I spoke Spanish, and when she did not understand me at all, she used a translator on her cell phone. Her name is Mariachiala and she is a pianist. She has this awesome, wild, shoulder-length curly hair, and she has great humor. We managed to talk with exuberant hand gestures and broken Italian and Spanish. It was so much fun. Fantastic and priceless. By the way, I gave her the URL to my blog before I left, because she asked [which I thought was very sweet of her]. Before I left the train we shook hands, I said, “Mucho gusto,” and she showed me her phone —  there was an Italian phrase displayed which translated to “Good luck with all” in English. 🙂

This is what the inside of the regional train to Cerchio looked like.

When I arrived in Cerchio I was whisked away to a beautiful three-story home, less than one minute from the station, by two tall Italian men and an eight-year-old girl. 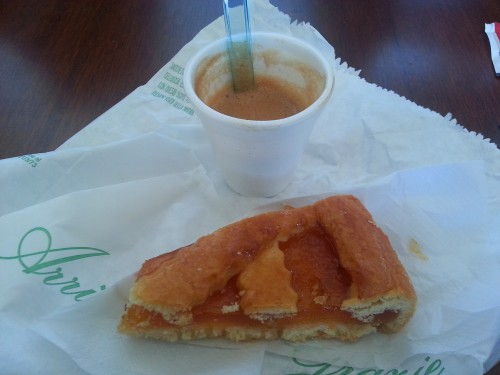 My host, Francesco, insisted on going to the bar and buying me a macchiato and pastry. He is so kind. 🙂

My night has been a blur — I tried to nap from 2 p.m. – 7p.m. [didn’t happen], I ate yummy vegetarian pizza and drank red wine, and had tequila shots and an amazing “sex on the beach” cocktail. I thought I’d go to bed after the pizza and wine, but my host convinced me to grab “coffee” at the piazza, and he said he would have me home by 10 p.m. At the piazza I realized I did not want caffeine to ruin the exhaustion I felt [I was looking forward to a dead sleep], so I ordered tequila. I would have gone home shortly after but I was introduced to an Australian woman named Yvonne [they call her Ivana here in Italy]. She intrigued me with the story of her quest to trace her family history to this very town. She had my full attention once I heard her Aussie accent and when she mentioned “lahrge heestorical books at the commewnity centah.” So she and I ordered a “Sex on the beach” [which was better than any sex on the beach cocktail I’ve ordered in the U.S., and it was only 3 euro. Score!]. I sat out in the piazza with Ivana, my host, and his daughter well until 11:30 p.m. or so…

The piazza had crowds of elders, 30-40 year olds, and children. I found it fascinating that children can run in and out of the “bars” here [not to drink but to hang out or chat], and they usually stay awake and play/hang out in the piazza until 1 a.m. Yes, the children. The bartenders  in the piazza knew my host’s daughter and chatted with her every time she went inside the bar. I could tell this town is very friendly and everyone knows one another.

Before we walked back to the house I received a notification that Mariachiala [from the train] visited my blog and she left me a comment. That touched my heart and I thought that was very sweet. I have to say….that this day….has been quite fulfilling and very interesting. And I am extremely sore from carrying my belongings and sitting on trains, so I am about to crash.

Thank you Cerchio, for the warm welcome. 🙂

The view from the bathroom on the top floor of the house where I am staying. 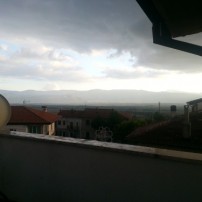 From the terrace I can see the flat land below the mountains, which once upon a time was filled with water. It was the magical Lake Fucino.

This is the view of part of the village and the infamous mountains in the distance, right from the terrace on the third floor [where I am staying].